Hello, here's my "no money spent team" (which I have of course have followed) 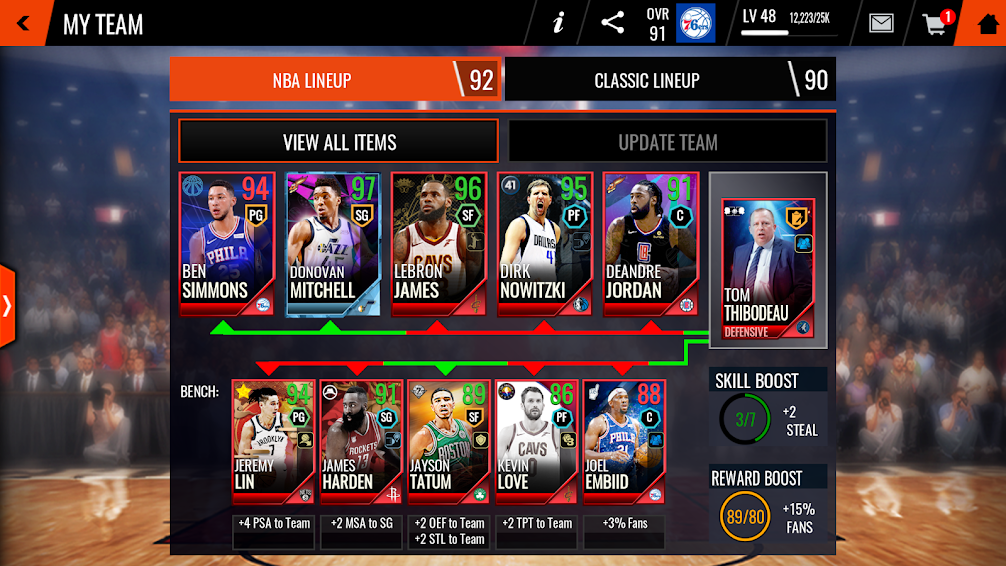 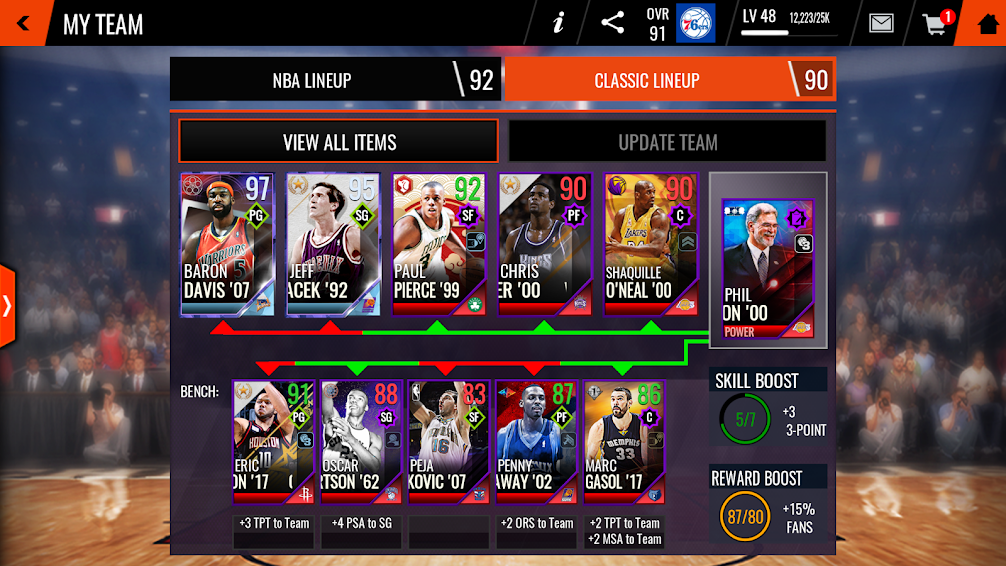 I got half a mill in the tank, and this is likely one of the worst franchises posted so far :mrgreen:
S

where are the pics

i guess the theam has no players haha

I switched hosting sites so hopefully you'll see them

Update: I have 93 Embiid now

Alright, not much action on my Thread again. Anyway, I did manage to snag the 97 AI for 1.8 million, which at the time of buying was a steal. Anyway through a vacation and some losses I ended with this after a 16 million shopping spree (Going from a 92 to a 95 (96 somehow due to a glitch))


PG: 98 HOTM Ben Simmons- Ben Simmons had a great and monstrous start to his "rookie" season, eventually winning the award for those "like him". An oversize PG or namely Point Forward, It's fun to bully smaller player at this position, which reminds me of the 91 Giannis from last year which could spin and drive easily. This year's CNY Master Lin happened to be this dude, which I complained so often about (his deadeye 3 point shooting in H2H, SMH) meant I eventually went for him [the 94 Playmaker] once his craze settled down. He replaced my 94 Lin [who just returned today] and as usual he was a nice playmaker. My only complaint was his awkwardly high 3pt rating, and his 94 Overall card art, which looked pretty trash. I switched to his 98 just today, which has had some criticism for his similarity to his PO Playmaker, thus I abstained 'til now. His card is amazing and he plays just a well, albeit maybe a bit better on defense as I noticed today.


SG; 96 Awards Victor Oladipo- Oladipo is one of my favorite 2 guards within the league, and this year he did phenomenal in Indiana now by himself. I was shopping for him after trying quite a few guys. Great driver and this time, having a high 3 point rating. MIP winner too!


SF: 97 Royalty LeBron- Last season, I was broke as hell, having one of the dryest set of months. This year I set to challenge that, and even bring home a grinder card, and this year it was him, LeBron. I immediately stripped away all my free NBA Cash only to fall one collectible short. After 3 weeks of hard events on Valentine's Day, I happened to pull that last collectible. He would then be an insane great for my team, giving a long line of Ws in H2H, and ultimately being nerfed during the start of the Showdown era, He still shone and his lone clutch per quarter was put to good use still to this day.


PF: Awards 97 Kyle Kuzma- I was shopping a power forward at the same time of Oladipo, sort of grew into Lonzo's influenced Lakers and had some awesome games. No wonder he deserves this card.


C: 98 Dream Showdowns Embiid- The Process +a Black Mask too. Embiid is one of my favorite Cs in the league, having a very cool style of play, and embodied "Trust the Process" a wonderful saying, when you are in doubt in life.


PG- 94 LNY Superstar Lin- Of course a card I wouldn't go without. He was one of the few players I watched when I began to seem interested into basketball. Unfortunately he had a very serious knee injury sideline him this past season and now a Hawk, he can hopefully mentor a newbie Trae Young, who may when day hopefully take rein of the Hawks franchise.


SG- 95 Juggernaut Paul Pierce- Sadly Paul Pierce, another one of my favorite shooters only had a 95 this year as his best card, and so why not put him here. 1.3 million well spent?


SF- 97 Legend Peja Stojakovic- Picked him up due his awesome stats. Played some qtrs with him, man he's fire. Hitting almost everything. Only issue is his slow release, which he tends to get blocked by.


PF- 95 Legacy Dirk- The first official "master" of season 2. Well he was great until I got him, which he began to brick pretty much everything...


C- 95 Finals David Robinson- No wonder I could choose one of the Spurs greats for my lineup. Awesome defender and respectable guy


PG: 97 Flashback Baron Davis- BDiddy was part of that Golden State "We believe team", and also on the crippled 2012 Knicks team (the year of Linsanity), which he eventually dislocated his entire knee in Game 4 of round 1. He never played again in the league but had a short stint a while back in the D League. Anyway his playstyle is really fun and really fits my exact way. Good deal for 900k right after the promo


SG: 98 Flashback AI- Of course why not pick him up for 1.8 mil in May. His 3 was weird but became better as I played. But an excellent driver. I don't really care about his height in general, but he was amazing in his heyday.


SF: 95 ASMVP LeBron- Of course, why not honor the King once more. Also one of the earliest plats in the game (3rd I think?) he lead a pretty awesome All-Star time to a close W and eventually be the game's MVP. Quite an awesome card.


PF: 92 International Yi Jianlian- Why not give tribute for one of the Chinese greats? During his stint in the NBA Yi only showed flashes of greatness, and ultimately had little place within the league soon after. He attempted to come back in 2015, though he left as he had a small role on the team. Last season he had a 93 Ambassadors card which was insanely expensive and also hard to find, but now we have ourselves a solid player and now the Chinese backcourt
C: 98 International Yao Ming- The Chinese backcourt is not complete without the "meme". Yao is considered a great despite his short-lived career from injuries and his great height. I remember having Muresan from the flashback promo with him being insane with blocking, and also having the same height.
Bench:


91 Legend Eric Gordon: 3pt shooting guru as usual, and his boost was awesome too. Helped with the Rockets on a good run this season.


Of course another great, I acquired him since he looked like a feasible SG bench option. Robinson was the first to average a triple double back in the weird 1962 NBA season, where Wilt also averaged 50 ppg and Bill Russell ended up the MVP


SF92 LNY Paul Pierce- Sadly, this was his best card, and thus I trained him up with a load of TP. Great shooter and memories from season 1.


PF: 90 Legend Chris Webber- During my ultimate rebuild back pre-Showdown, it seemed like a good option for 800k, given his plat was a good bit more. He played alright and his dunk rating was supposedly "average"


C: 90 Harvest Master Shaq- Such a weird card. Never really used him to much in fear of turnovers, but he was a big diesel. I grabbed him in rebuild. I remember seeing back in December a ton of these guys for free, as supposedly one dude had a gigantic supply of these things. His +5 block boost is nice.

Nice lineups, if legacy events next season are as boring as it's now, might as well get players you like IRL.
S